Notice: Function add_theme_support( 'html5' ) was called incorrectly. You need to pass an array of types. Please see Debugging in WordPress for more information. (This message was added in version 3.6.1.) in /extra/users/airsnark/public_html/wp-includes/functions.php on line 5831
 TSA Gone Wild! – AirSnark
Skip to content

That’s what they need to be called.  Not Transportation Safety Administration, but TSA Gone Wild!  Why?  Okay, so there’s already the 85 year old grandmother who was stripsearched.  Now comes word that the TSA detained a pregnant teenager because her purse had the design of a gun on it.

Not an actual gun.  But the design of a gun.  Here it is: 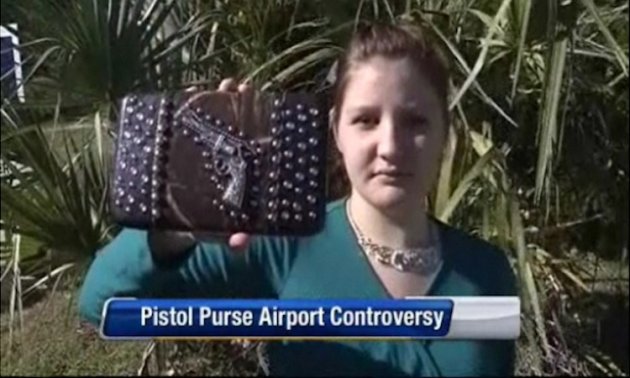 The teenager was so detained and harassed that she missed her flight, and the airline had to reroute her to Orlando (from Jacksonville), making her mother drive about 150 miles to go pick her up.

WTF is up with the TSA?  And the holiday travel season isn’t even on us yet; it can only get worse.